Known as the land of beautiful horses, mystery and freedom, Cappadocia is located in the centre of Turkey.

I booked our package to Cappadocia with Neopolis Travel. Hakan, the contact at the travel agent, was efficient and accommodating ensuring we had everything in place for our break (early October 2018).

Our package included return flights to Cappadocia from Istanbul, Transfers in Cappadocia, Accommodation for one night, Hot Air Balloon ride and a Private Tour of Cappadocia.

From Istanbul you can get packages starting at £300 per person.

You may know Cappadocia as the place where over 100 hot air balloons go up in the air. This is the main reason we booked this part of the trip. My mum wanted to go on a the hot air balloon for her birthday and after hearing the U.K. rides got cancelled on a regular basis I thought Cappadocia would be a better bet.

The hot air balloons don’t get cancelled that often here however within 3 weeks (end of Sept/beginning of Oct) they were cancelled over 6 times, one being on our trip. The guide told us about 7 years ago there were a couple of accidents and since then the Civil Aviation Authority determines whether they go up or not. The winds cannot be more than 6mph. Most tour companies give you a refund for your balloon ride if it does not go ahead because they expect them to.

My recommendation would be to try and stay 3 nights in Cappadocia to increase your chances of getting on a ride. Most rides go from Goreme.

As part of our tour I had a choice of three hotels and picked the middle one. It was called Sacred House Hotel.

Located in Nevşehir, the hotel has kept its Ancient Greek architecture and has an amazing touch to it. Each room has its own tale and character with a beautiful Greek twist. The hotel is one I would recommend and hopefully the photos will do all the talking.

The hotel does get chilly due to its structure however the rooms and all communal areas are kept warm and well heated.

The bar and dining area is decorated with great paintings and definitely makes you feel cosy and at home.

With less than 25 rooms, each room is decorated with different antique furniture and is luxury. The toiletries were Roberto Cavalli throughout the hotel.

Once we arrived our suitcases got taken to our rooms and we were served a drink of our choice with cake in the main courtyard.

We had booked Deluxe rooms that were next to each other. We looked at the first room and were pleased with the room and then we opened the second and that had the same wow factor.

We settled in and then went to the spa/pool area for a swim. The water was warm and the surroundings were beautiful. The pool floor was made with red mosaic tiles which gave it a lovely colour.

Later in the evening, we walked down to the town centre for something to eat. I found in Cappadocia the main cuisine was beef and it wasn’t that easy to get vegetarian food. There are plenty of cafes open until late if you fancied a brew in the evening. After walking around we dined at Ugrak Restaurant. We had a nice meal with a view and it was reasonably priced too.

We started with a 2 miles hike around the Rose Valley. We weren’t expecting to walk that much but it was nice to be out in the fresh air and learn about the valleys and it’s history. We got to see the famous fairy chimneys, admire the beautiful coloured rock formations, visit some interesting caves, pick on grapes and learn a lot about the history of the place.

After our walk, we went on to a pottery factory, Sultans Ceramic. This a family run store that has been operating for 200 years and has been passed down 6 generations. It wasn’t until the owner showed us the skill and labour that went into making each of their high quality pottery items that we appreciated the cost. Each of the one-off pieces was made with quartz, decorated with mineral dye and coated with a glaze.

We had a demonstration on how one of their classic items , Hittle Jugs, is constructed and my dad had a chance to make a bowl. He said it looked much easier than it was.

After browsing the shop and looking at some of the beautiful pieces that the staff had created,  we went to a factory that makes Turkish Rugs. I didn’t realise some rugs (wool on cotton) take 10 months to make and the designs are just so intricate (hence the big price tag). My mum had a go at this and it went to show how much labour and attention to detail is required.

At the factory we also got a snippet of how silk thread is made. It was all so interesting and an eye opener.

Our next stop was the underground city, Kaymakli Underground City. These cities were popular in Cappadocia and were used as shelter from enemies centuries ago. It was fascinating to learn how they had cities built under ground. Now they are used as storage for food like potatoes because the are great for self-regulating temperatures. If you have walking difficulties and are really tall, check with the tour guide before going in.

Unlike many places pigeons are loved in the country. Our last stop was the Pigeon Valley ( Guvercinlik Valley). Home to thousands of pigeons and little pigeon huts that have been formed on the rocks is a beautiful view. Pigeons are used as food and fertiliser for their infertile soil.

Due to its location and climate Cappadocia produces a lot of pumpkins, apricots, grapes and potatoes for local consumption and export.

After a whole day of touring we were dropped off to the airport at 6pm for our flight back to Istanbul.

In between our tour we went for lunch at a local Turkish restaurant called Old Greek House. It has been running for over 100 years. Before we started our tour, the tour guide asked what dietary requirements we had and we said no beef. I think he just disregarded what we told because the restaurant we went to had 1 chicken dish and no vegetarian main meals. It was a beautiful setting and we did enjoy the best baklava there however the meal was average. The tour was brilliant however this was a bit of a disappointment because it was clear we went here not for the authentic Turkish food ,but because the tour guide knew him. 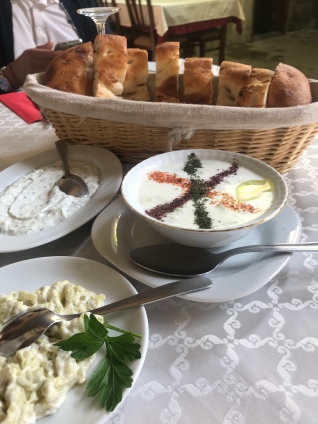 Though we never got to go on the Hot Air  Balloons, we still had a lovely time exploring Cappadocia. It is packed with culture and has a lot to offer.

Searching is in progress

don't miss out on future posts